The R & A and the United States Golf Association have worked closely for more than fifty years to produce a uniform code of rules so that wherever golf is played the same laws apply. Every four years these two governing bodies, after consultation with golf authorities worldwide, agree any changes that they consider will make the Rules of Golf fairer and easier to understand.

New rules come into force on 1st January 2008. Four million copies of the ‘Rules of Golf’, sponsored by Rolex, will be printed in English. The new rules will also be printed, under licence, in twenty-five other languages. Rule books will be distributed free of charge to golf clubs and may be ordered on the R&A Website
‘Decisions on the Rules of Golf 2006 – 2007’ becomes obsolete and is replaced by the new 2008 – 2009 edition. This book is invaluable not only for Rules Officials but also for all those involved in the administration of the game (e.g. club committees). It may be purchased from the above website or from high street or on-line booksellers.

Many members will have read in the press recently that there are to be changes to 28 of the 34 rules but there is no cause for alarm. ‘Rules of Golf 2008 –2011’ contains a new ‘Quick Guide to the Rules of Golf". This is excellent and should certainly make players feel more at ease with their rule books. Many rules have simply been re-worded in order to make them easier to understand. One example is the term ‘reasonable evidence’ that was used previously used in several rules. This was difficult to interpret and has been changed to ‘known or virtually certain’ which is much clearer.

Several other changes are to penalties rather than to actual rules and in every case the change favours the player. When a ball in motion is stopped or deflected by the player, her partner, or either of their caddies or equipment the penalty has been reduced from loss of hole in match play and a two stroke penalty in stroke play to one stroke in either form of play (Rule 19 – 2). This is a very welcome change. Many members will have been in the situation where the ball re-bounds off the face of a bunker and it is impossible to move quickly enough to avoid being struck by it!

Until now a flagstick that had been removed and placed on the ground was not allowed to be moved whilst a ball was in motion. This left players in a ‘catch 22’ situation. Moving the flagstick in case a ball in motion struck it incurred a penalty under one rule (Rule 1- 2). Leaving it on the ground to be struck by the ball incurred a penalty under another rule (Rule 17 – 3). This situation has been resolved. A flagstick, whether attended, removed or held up may now be moved when a ball is in motion (Rule 24 – 1).

The penalty for using a non-conforming club remains disqualification. The R & A announced four years ago that from 1st January 2008 all drivers must have a conforming clubhead and ensured that this was well publicised. Sufficient warning was given to allow players plenty of time to check and, if necessary, change their drivers. This rule applies to all golfers of all abilities and in all forms of play. The required specifications are set out in Appendix II, 5c of the new rule book and detailed lists of conforming and non-conforming driver heads may be found on the R & A website. In club golf it is the responsibility of each player to check that her equipment conforms to the Rules of Golf. Players taking part in County or National events should also check as to whether the Conditions of Competition include the Driving Club Condition. If so any driver used must be on the R & A’s ‘List of Conforming Driver Heads’. For more detailed information refer to the R & A website and in particular their ‘Frequently asked questions’ on this topic.

Space does not permit me to mention, let alone explain, every single rule change but I have highlighted those most likely to crop up in the normal course of play. For more detailed information refer to the R & A website and to ‘Principle Changes introduced in the 2008 code’ which you will find on page 6 in your new rule book. Always remember that the Rules of Golf exist to make the game fair for all players. The more familiar you become with the rules the more you will enjoy your golf.

The Council of National Golf Unions has published the CONGU® UHS (Unified Handicap System) 2008-2011 manual which is the result of substantial voluntary work of the Council Members during the last four years.

The Council of National Golf Unions (CONGU) is the governing body for handicapping matters in Great Britain & Ireland and is comprised of members from the men’s and ladies’ Golf Unions/Associations in England, Ireland, Scotland and Wales with additional representatives from The R&A and the LGU.

The UHS 2004-2007 manual included, for the first time, a unified approach for handicapping men and ladies under the same system. The 2008 UHS has built on this success and has been expanded to include a number of new concepts. These include Supplementary Scores, Nine Hole Handicap Competitions, a separate CSS calculation for “Home” and “Away” players in Open Competitions and assistance for handicap committees in carrying out the time consuming Annual Handicap Review (AHR). The manual has been totally revised to make it more user friendly to clubs and their members by placing the clauses in a more logical order and adding explanations to relevant clauses (in a blue shaded area) to clarify the system.

The section on Supplementary Scores has been included to assist golfers who, for whatever reason, play in few or no competitions each year, by allowing them to return cards outside competitions for handicap purposes. At the discretion of affiliated clubs, a limited number of Nine-Hole qualifying competitions may be run and such scores shall be used to adjust handicaps. This option is designed to attract more players into the Unified Handicapping System.


Common sense has always suggested that in Open Competitions, the ‘Away’ player is often at a disadvantage compared to the ‘Home’ player and subsequent statistical analysis showed this to be on average between one and two shots. Since this unfairly affects adjustments of handicaps, there will now be a separate Competition Scratch Score for ‘Home’ and ‘Away’ players to take account of this factor and to provide a more equitable basis for handicap alterations.

The CONGU® website – www.congu.com – is being updated to explain the changes and also to answer many queries about the UHS. The “Myths and Misconceptions” and “Frequently Asked Questions” sections should be of particular interest to the club golfer. All the constituent Unions/Associations websites have links to the CONGU® website.

CONGU believes that the revised manual and the incorporation of the new concepts will assist in meeting the demands of the modern game and the changing needs of club members.
Posted by Carol at 11:34

Sally Smyth is now on the RLCGA Committee 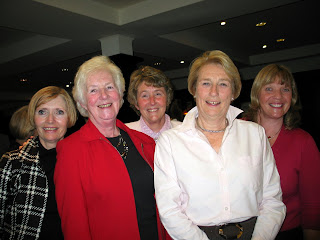 The Renfrewshire Ladies County Golf Association held their AGM at Haggs Castle Golf Club on Wednesday 7th November. Fiona Roger has now finished her 3 years on the committee and Sally Smyth now goes on to the commiittee. Sally had to send her apologies as she was away on holiday as was unable to attend.
The photo above has the "few" Ranfurly Castle ladies that attended the AGM where Christeen Finlayson (Whitecraigs) is now the new Captain and Trish Brown (Kilmacolm) daughter of Janet Gillies is the new Vice Captain. Fiona Roger and Vivien Howe both collected prizes.
To read all about it go to the Renfrewshire Website
Posted by Carol at 13:03 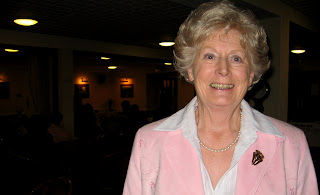 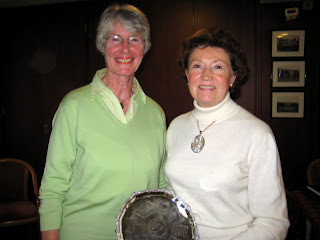 Congratulations go to Pat Walker on ending her 1st year as Captain of the West Vets by chairing their annual AGM at Cowglen Golf Club. Lilias Snodgrass who is the Treasurer gave an excellent report to the 52 ladies who were present today. Maureen Irving was presented with the Runners Up Trophy for the Bronze Championship.
To read all about it and see some Photographs go to WEST VETS WEBSITE
Posted by Carol at 21:35