Tuesday night, 25th June, was the final match of the West Renfrewshire League season, having been rearranged from last month due to a flooded course.

The match was a very competitive one with Caldwell, who have seen some new ladies join from Beith Golf Club and renewed vigorous determination from their captain and players, since we last had an easy home victory over them two years ago! I am pleased to report that the team managed to win 3.5/2.5 but it was a nail-biting finish with Mary H coming in with the crucial half in the final game in.

This result will ensure the team remains in Division 1 for next year, even though the final position is not yet know with other clubs still having matches to play.

Thanks to Vivien Howe for arranging (and rearranging!) the matches this year and to all the ladies who have played - Jan, Vivien, Agnes, Lilias, Louise, Helen A, Mary H, Joy, Gillian and Morag.
Posted by Ranfurly Castle Ladies at 10:46

Monday 24th June was the day for the Greenlees team's 3rd home game of the season and also the worst weather forecast of the year, with thundery showers threatened.

As it turned out there were thundery rumblings and one flash of lightning before the threat cleared away and most games were able to finish, albeit getting rather wet. This was much to team captain Anne Judge's relief as rearranging these games is almost impossible.

The team managed a good 6-3 win against a West Kilbride team that included many old friends, including Helen Craig.

Next up is Prestwick St Nicholas (away) on Friday 5th July. That will be a tough challenge!
Posted by Jan at 14:30

On Thursday 20th June, the West Renfrewshire League team of Jan, Vivien, Agnes, Louise, Helen A and Morag enjoyed a home win against Renfrew 4-2. Special mention to Louise, who won a point in her first outing for the team. Well done girls!
Posted by Ranfurly Castle Ladies at 17:15

On Wednesday 19th June, in the Grans Trophy:

Congratulations! And many thanks for the lunchtime drinks!
Posted by Morag C at 13:15

23 ladies played on a rather pleasant day , although there were some heavy showers in the afternoon.

6 ladies played on a decent day of weather - compared to what we've been having!

4 Ladies played on a day of sunshine and sharp showers.

All played on the green course. CSS 72

Marissa & Kevin Barr won our local competition, eventually held on the evening of Fri 24th May after being called off for bad weather on the original date of 10th May. They went forward to play in the National Final of this competition on Friday 14th June.
They scored (jointly) a very respectable 34 pts and finished tied 10th overall from 112 pairs from all over Scotland!
Very well done Marissa & Kevin!

Winning scores on the day were 41pts and 39pts. These pairs, and the runners up, will head to Royal Portrush to play on 13th July before the Open tees off.
Posted by Morag C at 12:01

Jan Macnab and Helen Abram represented Ranfurly Castle yesterday at the Scottish Golf Women's Medal Grand Final. Both had qualified for this last month playing at East Renfrewshire Golf Club.
The Grand Final was played on the Eden Course, St Andrews, on a day where the rain stayed away to let Helen finish but absolutely soaked Jan at the 17th!
No prizes for the girls but very respectable buffer zone scores for both (Helen 73, Jan 74) which placed them in the top third of competitors. The CSS was 72 with Silver Division won by a 68 and Bronze won by a staggering 62 from Margaret Adams of Gleddoch.
Posted by Ranfurly Castle Ladies at 10:17 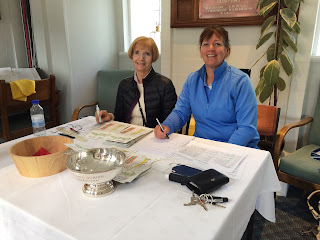 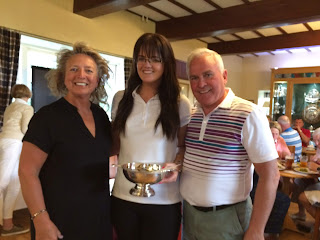 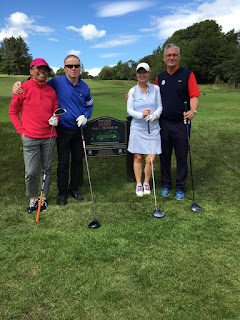 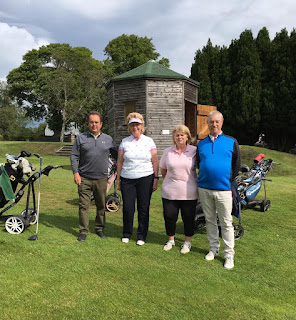 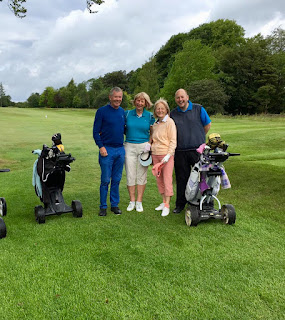 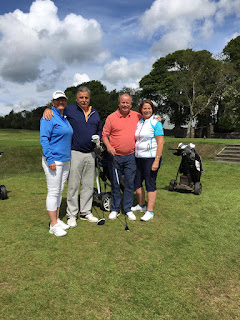 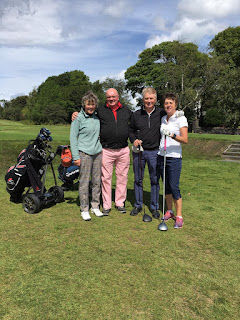 After the first game of the season had to be postponed two weeks ago because of torrential rain, the team started the 2019 campaign on Thursday night at Ralston, on a dull evening that was mercifully dry despite the forecasts.
It is always tough to play away from home and last year's Division 1 winners, Ralston, once again proved formidable opponents, beating Ranfurly Castle 3.5 games to 2.5. Well done to Vivien, Helen A and Gillian who managed to get points away from home. Despite the loss, we enjoyed the evening as the course, the meal afterwards and the company of the Ralston ladies were all great. We will hope to be back there next year, trying again for that elusive extra point!

The draws have been done for this year's Club Championship and Bronze Championship. The first round ties, to be played by 20th July are as follows:

The notices will be on the Notice Board when we are back in our Locker Room next week.
Posted by Jan at 21:47

I have been advised that the current electrical and heating work in the Ladies Locker Room should be finished by the end of the week and we should be back in by the beginning of next week.
Posted by Jan at 21:36

Posted by Ranfurly Castle Ladies at 21:45