Merry Christmas to all our readers

Your Captain Mary Craig, Your Vice Captain Mary Harvie, Your Webmaster Carol Fell and all the committee wish all the ladies fom Ranfurly Castle Golf Club plus all of the Ranfurly Castle members who have read these 2007 golf stories a very Merry Christmas --- Click on the photo below to test your Christmas brain !! 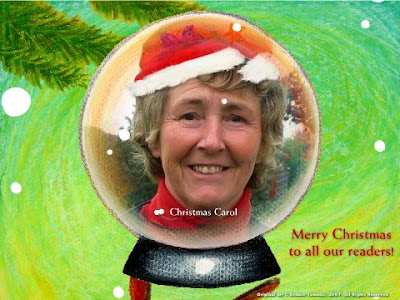 SPANISH ISLANDS GIRLS' CHAMPION
By COLIN FARQUHARSON
Since publishing the story of Lauren Mackin, a 16-year-old Scottish girl living with her parents on the island of Majorca, winning the Spanish Balearic Islands' girls golf championship recently, it has come to light that golf is by no means her No 1 sport.
Lauren has confessed that running is not her main sport at the moment. She really does not have time to play golf!
The amazing thing about Lauren, who did not take up golf until four or five years ago, is that has improved her handicap from seven to four this year despite giving running her top priority
Last year Lauren played in the St Andrews girls’ open quaich (handicap) tournament and lost to Jessica Scott (Wanstead) by one hole in the final. Lauren was conceding nine strokes to her opponent.
Lauren is a member at Son Muntaner golf course, a newer course than its immediate neighbour, the better-known Son Vida. Both are fairly close to Palma, the capital of Majorca.
“I am also a member at Ranfurly Castle Golf Club in Scotland but I have not played there for a while,” said Lauren.
“Sometimes I go over to Scotland to visit family and friends.
“I’m a very sporty girl. I love all sports and challenges. I lay beach volleyball and I’m in the beach volleyball team here in Majorca. During the week I play tennis with my friends and sometimes I play golf.
“But my main sport at the moment is running. I compete nearly every weekend in races and I’m a member of a running team in Majorca.”
Lauren's mother Jennifer summed up her sporting daughter's prowess:
"I hope you don't think we are playing this (winning the Balearics' girls championship) down but we don't want you to think that our daughter is an up and coming golf star. However she is a very good runner and was the national Scottish Under-13 crosscountry champion, Scottish schools crosscountry champion, national 1,500 metres champion and national road champion - all in the same year: 2003 !
"Lauren is still a member of the Giffnock North Athletic Club in Glasgow. When she is in Glasgow she sees golf coach Karyn Burns at Mearns Golf Academy. She has not had many golf lessons and never had any here in Majora where we have been for the past three years. "She is a very fluent Spanish speaker and is now studying German ."
In short, Lauren Mackin is a talented young lady on and off the golf course.
Posted by Carol at 00:09

32 ladies played in the Christmas Cracker yesterday morning in what can only be described as WET !
Alison Robertson and Pamela Mackenzie were the winners of the 9 hole Greensomes and Lois Brown won a prize for having the best hat.
A glass of mulled wine helped to warm everyone up at the end and there was plenty of chat and much hilarity!
To see enlargements of the photos go to Ranfurly Castle Christmas Cracker Winners
Posted by Carol at 15:52

The Ladies annual Christmas stableford/lunch will be held on Wednesday 12th December.
Ballot between 9.20am and 10.am with coffee available if desired. Lunch will follow at approximately 12.00 for anyone who cannot make the golf.
Christmas spirit is essential! Looking forward to seeing everyone there.
Mary Craig
Posted by Mary at 08:29 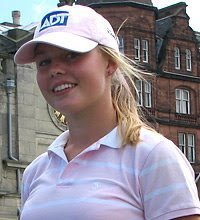 16 years old Lauren Mackin who is now living on the island of Majorca with her parents, has won the Spanish Balearic Islands’ girls championship and the No 1 Under-18 ranking for 2007.
The Balearics consist of Majorca (20 golf courses), Menorca (one course), Ibiza (one course), Cabrera and Formentera. The Islands had close on 800,000 inhabitants at the last census.Lauren, picture left from St Andrews Links Trust website, who did not take up golf until four or five years ago, has improved her handicap from seven to four this year.After a good showing in the Ballearic Islands’ women’s championship – she lost out by one shot to experienced Spanish senior player Vicky Pertierra, Lauren came into her own in the girls’ championship last weekend. At Alcanada Golf Club, rated the most difficult of Majorca’s courses, Lauren won the title with rounds of 75 and 77 for 155. She won by five strokes from Luna Sorbon, a highly-rated Spanish girl and the favourite for this title.Last year Lauren played in the St Andrews girls’ open quaich (handicap) tournament and lost to Jessica Scott (Wanstead) by one hole in the final. Lauren was conceding nine strokes to her opponent.Lauren is a member at Son Muntaner golf course, a newer course than its immediate neighbour, the better-known Son Vida. Both are fairly close to Palma, the capital of Majorca.
Posted by Carol at 17:13